When a Hollywood film is shot “on location”, it sometimes leaves the locals with a legacy, even a fixation on their moment of limelight. Growing up in Napa, California, we could only claim a couple of scenes from Howard the Duck, but this was still enough to warrant a shout out each time we drove past the “restaurant” on the Carneros Highway. Similarly, Astoria on the Oregon Coast will forever self-identify with the Goonies. This is hardly an American phenomena. The guides at Angkor Wat in Cambodia all knew at least two words in English: “Tomb Raider”. Udaipur, the City of Lakes in the southern part of Rajasthan, has institutionalized their nostalgia for the racy, pun-riddled, cold war schlock action extravaganza, Octopussy. 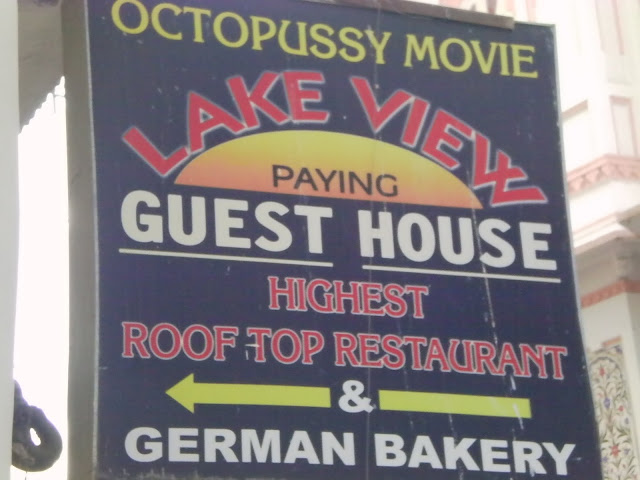 I remember seeing Octopussy with my father in 1983, parental discretion exercised in the usual manner (he took me to see Zardoz, after all). This was James Bond in his Roger Moore incarnation, running about and sexing it up in India as he pursued nymph-like jewel thieves and nuke-wielding Russian madmen. Though never mentioned by name in the film, Udaipur was selected to represent India in general, and this town certainly has a wealth of Indian showpieces. Prominently featured in Octopussy are Udaipur’s magnificent Venice-esque waterfront and dreamlike Lake Palace, teeming bazaars with absurd cow-and-rickshaw choked traffic congestion, and the dramatic mountaintop Monsoon Palace perched on a bare and jagged ridge overlooking the city. This is romantic India of a caliber that Hollywood could not hope to recreate artificially, and thus the town caught a sliver of international exposure that, almost thirty years later, the inhabitants still cling to.

At some point in the indeterminate past, a local entrepreneur began screening the film at their restaurant as a lure for tourists in search of familiar, comforting, mindless entertainment. The idea evidently caught on, and the movie is now run nightly at scores of rooftop cafés. Though the signage for “Octopussy Show” can be unwittingly reminiscent of those for “Ping Pong Show” in Thai red light districts, these are wholesome establishments full of washed and weary young Westerners looking for a little cultural anchor amidst the swirling Indian commotion below. In a sense, navigating Udaipur’s narrow lanes and tightly coiled backstreets was, for me at least, assisted in no small part by the ordered sequence of Octopussy venues.

What struck us most about “India” as it was portrayed in the movie was how little things had changed, at least in Udaipur. All the grand and noteworthy monuments aside, this town was stuck in the 80’s, parts of it in the 1880’s. The street fashion had not changed perceptibly from Octopussy to the present day, though this is not really news in the land of turbans and saris. The tuk-tuks looked identical, down to the black and yellow color scheme. Indeed, the same rickshaws on screen may very well still be operation today. The garland baskets and fruit carts and even the incidental advertisements plastered on stucco walls held a timelessness that is baffling. Udaipur is Udiapur, and that’s that.

We watched it twice, happily reclining on broad bed-like cushions that ran along the outer edge of the rooftop patio. On the second viewing, our waiter kindly translated a key phrase uttered in the local tongue during one of the many fight sequences in the film. Bond had judo-flipped one of the bad guys onto a bed of nails, and the baba whose bed it was shouted “Get out of my bed!” incredulously at the would-be assassin. We got the joke! Ha ha.

The beer we sipped was dubiously legal to serve, or so we learned from our ever helpful waiter. He cheerfully explained that our proximity to the massive Jain temple across the street prevented the business from securing a formal liquor license. The beer still appeared on our receipt, but we were enjoined with a literal wink to consider it “juice” as the waiter neatly placed our empty bottles over a low wall onto the neighbor’s roof. The Jain temple, theatrically lit up in the gathering dusk, loomed above us as an unmistakable reminder: Octopussy was all around us.

Shopping for your trip around the world? Check out our hand-picked items. We used all of these extensively on our trip and highly recommend each product to other travelers.

Of course, Amazon doesn't have everything. Send us an email if you need more personalized recommendations.

We quit our jobs in October 2011 and departed on a trip around the world. First stop: Mexico. Last stop: Unknown.