I was skeptical when we started out that day, given the uniformly crappy weather we’d experienced since the Bay of Islands (which is to say, the whole time in NZ). Low hanging clouds and drizzle moistened our ride in the shuttle van, and we were prepared to slog it out in the full wet, decked out in full raingear as we began our hike. But Mount Doom smiled upon us that day, breaking the clouds apart just long enough for us to complete the Tongariro Crossing. The mists of Mordor parted and the great fiery orb of the sun cheered the lunar landscape all around. I managed to snap a cheeky trailside photo of Rachel struggling to get out of her rainpants and long johns before the next wave of hikers rounded the corner. 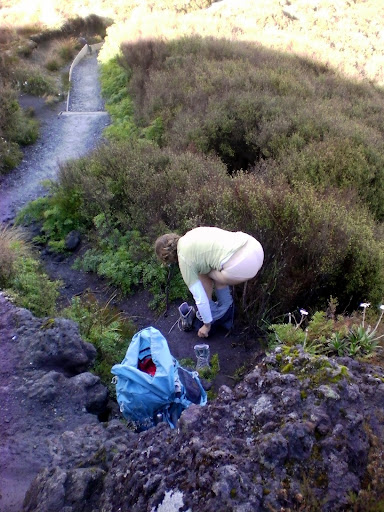 The sun is comin' out!

Already the line of daytrekkers was practically continuous, a steady trickle of bodies in Smartwool and North Face moving up the shallow grade, eventually pooling at the base of the first steep incline. A healthy dose of switchbacking ensued, each step producing an enhanced view of the reddish black and totally inhospitable landscape tumbling down the steep slopes all round. The geologists and John McPhees of the world could read a history of profound violence in the colors and textures of the terrain. The rest of us would simply have to content ourselves with spotting possible Lord of the Rings locations.

After a fair amount of huffing and sweating, we arrived at the basin between Tongariro and Ngauruhoe, the twin volcanoes that the Crossing crosses between. To the left, a barren ridgeline masked the peak of Tongariro so that it was difficult to say where it began and ended. Ngauruhoe, on the other hand, was impossible to mistake. Mount Doom, the star of the show, loomed ominously in all its glory, a perfect iconic volcanic cone. I could just barely make out a small group of climbers attempting the summit by direct assault, which is to say, single file straight up. They were about a third of the way up and I couldn’t help but wonder if they knew about the gold.

Yes, there is a gold ring up there somewhere. I have this on good authority from a guy who manned the gift shop in Hobbiton (a permanent film set and sheep farm outside of Matamata). Some well-heeled fan had purchased a high-end gold replica of the One Ring for almost a thousand dollars and proceeded to charter a helicopter and hurl it into the Crack of Doom. To this day, it lies in wait for some unsuspecting Alpinist Gollum to chance upon it. Serious nerd points all around. 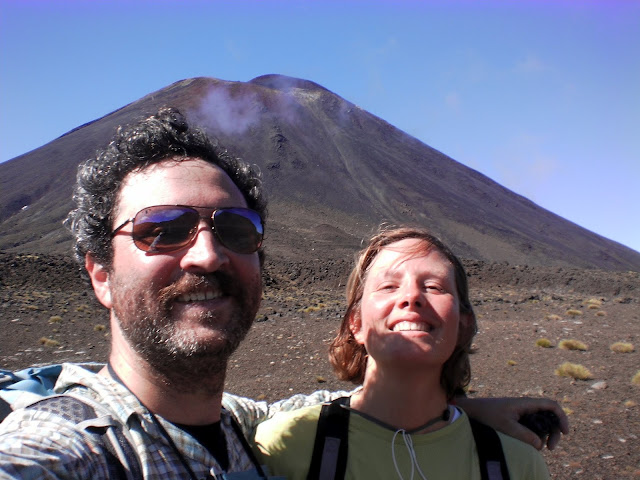 The basin was flat and dusty and had a reddish, distinctly Martian appearance, as opposed to the darker moonlike landscape below. It took no time to cross over to the next ascent, up to a low ridge that rose to the left. The ridge dropped precipitously away on the other side, and the wind at the top was burly, but the views were such that you couldn’t resist snapping that landscape photo despite the risk of getting blown off into oblivion. The ridge carried up to a smaller plateau and then climbed up to a singular peak over which the queue of hikers seemed to disappear, vanishing like lemmings over the edge.

At first I wrote this off as a deceptive perspective. As the peak grew closer, I became puzzled, even agitated, when the illusion continued to hold. One by one, they dropped off into oblivion, and I was next. By the time we reached the top, I could see that the peak was not dissembling after all, though the drop was less than lethal. The way forward was a gravel slide at a ludicrous grade, and dozens of people were busily picking their way down the loose volcanic crumble, moving rapidly downhill as gravity took control.

The view from here, the top of the Crossing, was literally and figuratively the high point of the hike. A full panoramic view encompassed both volcanoes, their attendant ridges and basins, and a sweeping horizon in all directions. A white blaze of snowdrift clung to Tongariro’s flank. Set in a deep gorge under some kind of natural Gothic archway was a blackened obscene orifice, a dragon’s lair or gate to hell. Below, at the bottom of the “trail” were two stunning blue tarins, little opaque pastel lakes encircled with thin wisps of sulfurous vapor. Beyond that, the trail dropped down into another basin and carried up to and along a larger, darker lake on its way out of view. 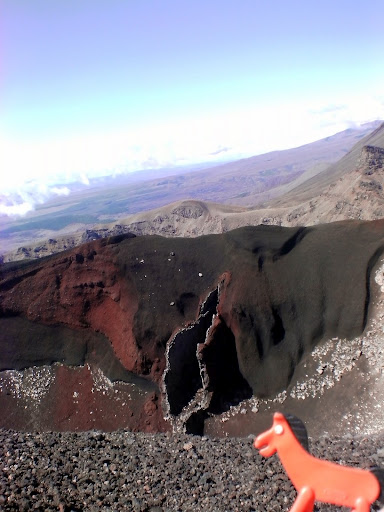 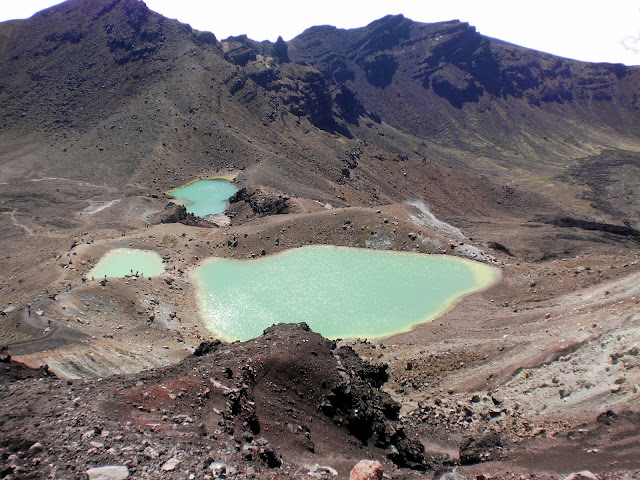 We skittered down the slope, digging heels in and filling shoes with pyroplastic pebbles. Rachel experimented with a few different footing tactics before settling on a dove-toed shuffle. She methodically scooted and snow-plowed while I hopped and stumbled down the chute. Before we knew it, we were lunching lakeside and looking up, watching the awkward parade of flailing hikers working their way down. The hard work was over for us, and we were still on schedule to rendezvous with the return shuttle. 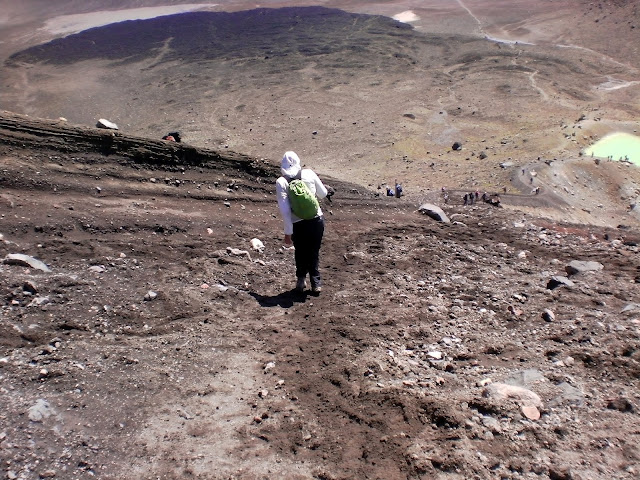 Shuffling down the mountain

Within a half hour we followed the trail through a cleft in the ridgeline and began the final descent in earnest. The rugged footpath quickly transformed into a manicured trail with artificial tread, convenient staircases, and the occasional bridge span to cross comparatively harmless gorges. The path crisscrossed the slope in broad shallow switchbacks, tripling the length of the downhill stretch but sparing our knees from a severe incline. Regular signage warned hikers to stay on the trail or else. At one point we passed a sign declaring that we’d crossed temporarily onto private land and, just in case we’d missed all the other posted warnings, it was especially important to stay on the path here. Somewhere out there was a hot spring that was off limits, the personal domain of some business interest or holdout country geezer. All who would attempt the Tongariro Crossing are hit over the head with dire warnings about trespassing. We, too, had been briefed while in the van on the ride out to the trailhead. It was hard not to dwell a little on this forbidden fruit, even occasionally looking over my shoulder as we dropped into the scrub brush that heralded the end of the hike. Even though I’d seen the face of Mount Doom, I’m still a little cheesed I couldn’t visit his steamy pimple.

Shopping for your trip around the world? Check out our hand-picked items. We used all of these extensively on our trip and highly recommend each product to other travelers.

Of course, Amazon doesn't have everything. Send us an email if you need more personalized recommendations.

We quit our jobs in October 2011 and departed on a trip around the world. First stop: Mexico. Last stop: Unknown.